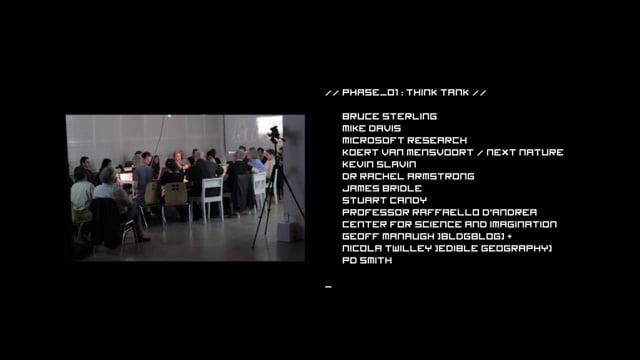 UNDER TOMORROWS SKY is a project by Liam Young of Tomorrows Thoughts Today opening in August at MU art space, Eindhoven. Liam has assembled a think tank of mad scientists, literary astronauts, digital poets, speculative gamers, mavericks, visionaries and luminaries to collectively author a proposal for a future city- an imaginary urbanism, the landscapes that surround it and the stories it contains.

On Saturday June 16 and Sunday June 17 the think tank will be coming together in physical space at MU but also in virtual space for a weekend of public presentations, discussions and workshops. Come behind the scenes as we open up the design process of the speculative city and expose the deliberations of the Under Tomorrows Sky think tank. See the work in progress and join us to debate the social, cultural, ethical and environmental consequences of emerging technologies.

At 8 pm on Saturday June 16th the members of the think tank will introduce themselves and present a series of wondrous visions of the future based on their own research or projects. On the following Sunday June 17 from 11am the group will get together for an open day of discussions, design workshops and live sketching as they begin to give shape to their city Under Tomorrows Sky.

Eavesdrop on the conversations, take part in the debates on what the future city may be and contribute to the discussions on why such speculations on tomorrow may be of critical importance for today.

The exhibition Under Tomorrow's Sky will open on August 10 at MU.
See www.undertomorrowssky.com and www.mu.nl for further updates.